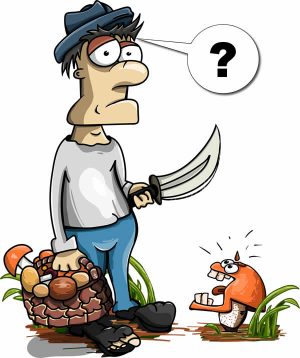 As with most things food and health related it’s difficult to give a definitive answer one way or the other. The scientific evidence suggesting the cancer-causing/toxic properties of certain edible mushrooms (especially when eaten raw) is inconclusive and has been disputed. Likewise, there’s not enough scientific evidence to conclusively prove that eating raw mushrooms is 100% safe.

Personally, I’m comfortable eating fresh raw (and powdered raw) oyster mushrooms (currently) based on my own research (unless future studies persuade me otherwise).

I cook button, portobello and cremini mushrooms (Agaricus) which are the most common source of agaritine the mycotoxin which is believed to be cancer-causing. I also cook other varieties of mushrooms to be on the safe side since I’ve only researched oyster mushrooms in terms of safety and in relation to their beneficial effect on rheumatoid arthritis. Cooking mushrooms breaks down a substantial amount of the agaritine, as does refrigeration and drying.

I believe the studies on agaritine causing cancer in mice are the source of concern for both Dr Greger and Dr Fuhrman, who both recommend cooking mushrooms. Here is a quote from Dr Greger: “Button, chanterelle, morel (which, incidentally, should never be eaten raw, or with alcohol), – oyster mushrooms, porcini – which is Italian for piglet (evidently when the mushrooms are really small, they look like piglets?). And, finally, shiitake.” As you can see he clearly warns against eating button, chanterelle, and morel mushrooms raw but doesn’t appear to include oyster mushrooms. However, I know that his general stance is to cook all mushrooms just to be on the safe side until further research suggests otherwise.

There’s also evidence to show that cooking mushrooms may increase nutrient availability and absorption, and of course it generally improves the flavour too :-)

By the way, button, portobello and cremini mushrooms are all the same mushroom at different stages of growth. I didn’t know this before, I only found out while doing some additional research for this post :-)