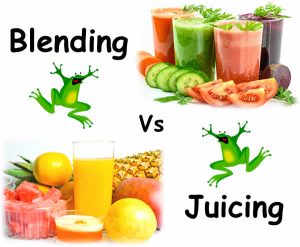 I just wanted to write a short post discussing the relative benefits or otherwise of blending (making smoothies) versus juicing. There’s quite a lot of confusion in both the online and printed media concerning this topic. I’ll provide my own views below (based on my own experience and research) in the hope that it will help to clarify things for those searching for answers.

For those who want a quick answer; in my opinion blending is far superior to juicing, although that’s not to say that juicing can’t be extremely beneficial in its own right when done for the correct reasons and with the right ingredients.

I’m as certain as anyone can be based on all the available evidence (and my own experience) that a lifestyle based on whole plant foods is the most effective way to prevent and also treat and begin to reverse the majority of chronic diseases. It’s also the most effective lifestyle platform for general health and vitality. However, when trying to treat and reverse a chronic disease such as rheumatoid arthritis it’s often necessary to increase the nutrient density and quantity of whole plant foods consumed and to improve their absorption. There are a number of ways to do this but two of the most common are to concentrate whole plant foods by blending them or juicing them, thus increasing the amount that can be consumed (and hopefully absorbed) compared to eating and chewing through high quantities of green leaves, vegetables and fruits etc.

Juicing – Benefits With an Important Caveat!

I could probably eat two or three apples at one sitting fairly comfortably, but it would be impossible for me to eat ten or fifteen for example. However, I could juice ten or fifteen and quite easily drink the juice within thirty minutes or so. Because the fibre/bulk has largely been stripped away and much of the apple’s sugar content has been released during the juicing process, the remaining liquid becomes hyper-palatable and the high number of calories consumed isn’t appropriately sensed by the stretch receptors in the stomach nor by the feeling of being fully satiated. I.e. if I ate three apples in one sitting I would feel full for some time (and benefit from the relatively slow release and absorption of the available sugar) but if I drank half a litre or so of apple juice in one sitting I would only feel satisfied for a relatively short time (and I would suffer from the rapid absorption of the available sugar probably followed shortly afterwards by a craving for more).

So the main issue with juicing is that it removes the fibre/bulk and concentrates the available sugars which leads to an unnatural imbalance in the way the whole plant food is consumed. However, by the same token many of the beneficial nutrients are also concentrated and in this way juicing can provide many potential health promoting benefits. The key is to understand that whole plant food juices cannot be treated the same way as normal beverages such as water and herbal teas. Whole plant food juices (especially fruits, beets, and carrots) need to be consumed/drunk slowly and deliberately i.e. every mouthful should be tasted and appreciated before swallowing. This way the benefits can be obtained without the sudden spike in blood sugar and also the nutrients will have a much better chance of being absorbed instead of wasted.

As a method of obtaining concentrated nutrients juicing can be very effective and beneficial in promoting health and treating chronic diseases. For example, juicing is often used as a method of reintroducing food after a period of fasting. It can also help to support a person who through injury or ill-health is unable to consume solid foods.

Blending – Benefits and No Disadvantages If Done Correctly

Blending whole foods has the advantage of retaining the fibre when compared to juicing. Fibre is critically important for gut health by supporting and feeding our friendly gut bacteria and it also enables them to produce butyrate which helps to maintain and repair the colon’s mucous layer. Also when blending, some of the sugars are still bound up with the fibre which helps to release the sugars more slowly into the bloodstream upon digestion. Retaining the fibre also increases the feeling of being full or satiated i.e. smoothies tend to be more satisfying and I’ve found that it’s quite hard to guzzle down half a litre of green smoothie and I instinctively have to sip it over a period of twenty or thirty minutes or so. If it was a comparable juice without the fibre I would finish it off in five minutes probably :-)

There are some important considerations when preparing and making smoothies in order to obtain the maximum health benefits, and this is where some of the confusion lies. For example, it’s important not to add too much fruit when making a green smoothie, the fruit should be for flavour in order to make the blended green leaves more palatable and enjoyable but bear in mind a green smoothie is not a fruit smoothie :-) When I make my own green smoothies I use about 90% green leaves and 10% fruits (such as blueberries, apples and pears). My goal is to blend around 500g of green leaves per smoothie and then drink this over the next hour or so while it is still fresh (although it’s okay to refrigerate this and it will still retain most of its nutritional value for the rest of the day).

Another important point when drinking smoothies (and juices) is to hold/swish the liquid in your mouth for some time after each sip (I usually do this for between fifteen and thirty seconds per sip), before swallowing it. This allows certain enzymes in the saliva to act upon the food before swallowing it, it simulates to some extent the act of chewing the original food, and it also slows down the rate at which the smoothie is consumed overall thus preventing blood sugar spikes and increasing the absorption of nutrients.

Finally, when I make smoothies I usually add some seeds (ground flax seeds, Chia seeds or hemp seeds for example) or some avocado in order to help with the absorption of fat-soluble vitamins and also to increase the nutritive value of the smoothie overall.

Many health influencers including many experts often suggest that eating huge raw salads is preferable to blending and making smoothies from the same ingredients. This view can be detrimental to people who are trying to make sustainable health choices, especially when fighting a chronic disease, which is not the same as trying to prevent chronic diseases and maintain good health in the first place. Large salads are wonderful and extremely healthy but I also believe that smoothies made from the same ingredients are even more beneficial and also more efficient and more effective when it comes to everyday sustainability and nutrient density when fighting chronic diseases.

Personally I think that blending as far as my body is concerned, is just an extremely efficient way of chewing the food which I’m about to swallow. The more my food is chewed the less work my stomach and my guts have to do to break it down and absorb the nutrients.

If I chew some salad for a few seconds and then swallow it, the particle size will still be perhaps 1 or 2mm, however if I blend my salad the particle size will be reduced to a level that is equivalent to me chewing each mouthful for perhaps five or ten minutes! Which as far as my body is concerned is exactly what just happened :-) This means I can consume larger amounts of green leaves and other raw whole foods in a shorter period of time and with an increased nutrient absorption rate. As long as I sip the smoothie and savour each mouthful, this provides me with a much more effective and realistic way to consume large amounts of green leaves and other nutrient dense raw whole foods, in the real world, where my food preparation and consumption time is often limited due to work and other demands on my time.

As I mentioned above, I want to try to consume at least 500g of raw green leaves per day in order to continue reversing and healing from my rheumatoid arthritis, without blending these green leaves it would be very difficult for me to consume this amount each day in the form of a salad. I simply couldn’t chew that amount (especially raw kale) and even if I could fight my way through that amount of raw leaf chewing I wouldn’t have enough time, willpower or desire to maintain it day after day, which is essential when treating and recovering from a chronic disease like rheumatoid arthritis. Plus blending (and juicing for that matter) allows me to throw in other highly nutritious ingredients such as nuts and seeds, turmeric, ginger, oyster mushrooms and so on.