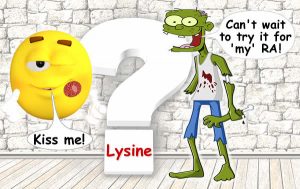 Just a short post to highlight the possible relationship between herpes and rheumatoid arthritis and how to prevent cold sores :-)

I first found out about the possible connection between herpes and rheumatoid arthritis many years ago when I came across some articles written by a chemist named David W. Gregg, Ph.D. He had some interesting ideas about the causes and treatments for many diseases but I found his thoughts on herpes as a possible cause of rheumatoid arthritis to be particularly compelling.

In my own case I know for sure that a severe tooth/gum infection was either the cause or a major contributor to my own rheumatoid arthritis, and I’ve read a lot of literature supporting the idea that various types of bacteria, viruses, and mycoplasma can indeed cause inflammation, joint pain and even rheumatoid arthritis. Weil’s disease, chlamydia, Lyme disease and H. pylori are just a few examples. It therefore seems reasonable to me that herpes could be a possible rheumatoid arthritis causing candidate for many people.

Dr David W Gregg believed that autoimmunity/rheumatoid arthritis may be caused by the herpes virus and that suppressing the virus might be an effective treatment. He knew that lysine was effective at controlling cold sores and thought that treatment with lysine in a high enough dose (up to 8g per day for short periods such as a month or so) might work with rheumatoid arthritis too. Later on, he had the opportunity to suggest this idea to two of his friends which resulted in the successful treatment of rheumatoid arthritis in both cases. You can read about Dr David W Gregg’s ideas and the two cases here: Rheumatoid Arthritis and Autoimmunity. I don’t know how long this link (and the one in my second paragraph above) will remain active because it’s quite old but hopefully it will stay in place for some time to come. Sadly, Dr David W Gregg himself died in 2011.

As anyone who’s had cold sores will know, herpes tends to lie dormant most of the time but then symptoms appear under stressful conditions; either emotional stress, or physical stress from a cold or flu for example. As Dr David W Gregg suggested, using lysine in high doses (up to 8g per day for short periods such as a month or so) can suppress the herpes virus and may in turn improve rheumatoid arthritis symptoms or even achieve full remission. I tried lysine for this purpose myself a few years ago but it didn’t work for me, however, I now realise that the dose that I took during my trial period was far too low. Very recently I’ve started using it again at a much higher dose to see if it has any effect on my rheumatoid arthritis, I’ll post about it after some time if I see any improvements.

Although my initial trial of lysine for rheumatoid arthritis didn’t work at the time, it did have a dramatic effect on another related but less serious problem – my cold sores! Previously I would get cold sores maybe once or twice a year but I’ve had none since I increased my dietary intake of lysine :-) and that was a few years ago now. I achieved this by eating more lysine rich foods (tempeh, pumpkin seeds, black beans etc.) and reducing my intake of arginine (a herpes promoter) rich foods.

Excess arginine in relation to lysine can activate the cold sore virus and although arginine is very important for health and the immune system, it’s not an essential amino acid. Arginine is readily available from a wide variety of foods so I don’t worry about obtaining a sufficient amount, instead as I mentioned above, I concentrate on eating plenty of lysine rich foods to maintain the balance against triggering cold sores. Also, as I mentioned earlier in this post, I’m currently trialling a high-dose supplement of lysine as a possible treatment for rheumatoid arthritis.

The herpes virus which causes cold sores requires arginine in order to replicate, lysine replaces arginine in cells and thus helps to prevent the virus from reproducing. Here are two useful articles regarding cold sores and treatment with lysine: How to Heal a Cold Sore Quickly and: Cold Sore Remedies.