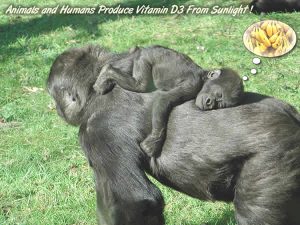 Recently, after months of rain and miserable damp weather here in Manchester, I started to develop a bit of a wheeze in my breathing, a few days later I developed asthma; something I have not really had since my teens. I know from experience that in my case it is linked to humidity and mold spores in the damp air, but it’s been so long since I had asthma I wondered why it had returned now.

After a little research and some head scratching (‘thought’ not lice!), I concluded that it must be due to the excessive recent humidity, my current work load (stress and insufficient sleep) and the fact that I’ve been straying from my RA diet over recent weeks and starting to experience a few mild symptoms (maybe I had become a little more sensitive to allergens).

Whilst I was researching I came across a report describing a potential link between asthma and vitamin D deficiency. After reading through the report it did occur to me that I’ve been working long hours ‘inside’ in front of the computer, either on-site, at my office or at home. Also, because of the dismal weather I haven’t been out much at weekend, and on top of that I also stopped taking cod-liver oil a few months ago for an unrelated reason.

It did seem like a possibility that a lack a of vitamin D may have helped to cause the recent return of my asthma. I was intrigued and continued to research the vitamin D link.

Now the interesting bit from an RA point of view; I started to come across reports and articles which also linked vitamin D deficiency to rheumatoid arthritis – something I had not read about previously other than the general need for vitamin D for healthy bones and its link with calcium absorption.

So, before writing this post, I read every article and paper I could find on this vitamin D link and I’ve included links to the most interesting and noteworthy of them, along with my own summary below.

Everyone knows these days that vitamin D is important for bone development and health, and also of its importance in helping to prevent rickets (here’s an interesting parallel link in the Guardian discussing vitamin D deficiency and rickets in kids spending too much time playing computer games).

It makes sense for anyone with RA to make sure they receive enough vitamin D (in my case using a D3 supplement with an extra virgin olive oil base) of course, but I wasn’t aware of the research linking RA (and other forms of arthritis) more directly with vitamin D deficiency.

The research and subsequent reports are based on various tests and trials including a fair amount of subjective data collection via patient form filling. However, it is still compelling and appears to reveal a number of interesting facts.

Also, there are a number of people (including doctors) who are promoting the use of vitamin D supplementation as either a possible cure for rheumatoid arthritis or as a method of significantly reducing symptoms. The proponents of this idea suggest using a much higher dose than the typical 200 to 400 UI per day recommendation. They suggest a dose of 4000 to 6000 UI per day.

I am very interested in this and I am going to give this a try for a while, maybe a month or two, then report my results here on my blog :-) However I will limit my intake to a maximum of 4000 UI per day during this initial period.

One aim is to see whether this supplementation will have any impact on my recent asthma but I am more interested to see if it will allow me to better tolerate certain food items which are outside my normal anti-RA diet. Will it prevent or reduce my symptoms? Will it improve one or two existing symptoms which I already have?

Here are the links to some of the most interesting articles along with a paper (pdf file) on the relationship between vitamin D and arthritis.

Could Vitamin D Really Cure Your Arthritis? – The Mail Online

Reasons That Vitamin D May Matter – The New York Times

Why You Need More Vitamin D – The Huffington Post