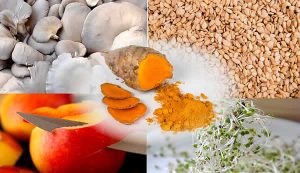 Here are my top five anti-inflammatory foods for rheumatoid and osteoarthritis some of which may surprise you :-)

All five of these foods form part of my whole food plant-based diet on a daily basis. They are easy to incorporate into raw salads or cooked meals and are highly nutritious and health promoting in their own right, as well as having specific anti-inflammatory properties.

Most edible mushrooms are health promoting and should be a daily part of everyone’s whole food plant-based diet, however, oyster mushrooms are a bit special.

Oyster mushrooms have the ability to both regulate our immune system and strengthen it at the same time. There are plenty of foods/herbs that can suppress or calm our immune system but not so many that can regulate it when it’s over-stimulated or underactive.

Oyster mushrooms are also selectively antimicrobial and anti-viral but without causing damage to beneficial gut flora. Oyster mushrooms are known to inhibit E. coli and Candida overgrowth for example, both potential contributors to rheumatoid arthritis.

The anti-inflammatory effects of oyster mushrooms have been tested and found to be effective at suppressing TNF-α (a cytokine) and down-regulating the expression of COX-2 (an enzyme), two of the most powerful pro-inflammatory components.

The anti-inflammatory effect of oyster mushrooms is more potent when they are eaten raw, but they are still beneficial when cooked. I eat them raw on a daily basis and they are actually quite tasty :-) Make sure you wash them thoroughly before eating and obviously avoid them if you have any kind of intolerance or allergy to mushrooms or fungi in general.

Turmeric as a food/spice can be added to a variety of meals on a daily basis and as such its beneficial effects can more easily be obtained and maintained, rather than paying for an expensive, isolated supplement such as curcumin (which I tried and found to be ineffective for me personally). I strongly recommend whole foods rather than supplements wherever possible, in fact there are only a couple of occasions when supplements are necessary or beneficial.

Turmeric is such a beneficial food/spice that it should be part of everyone’s diet on a daily basis (just like mushrooms – see above). It helps to treat and prevent ulcerative colitis, rheumatoid arthritis, atherosclerosis, leaky gut and many more chronic diseases. A small amount every day can have a beneficial synergistic influence on other anti-inflammatory food components within a whole food plant-based diet.

Turmeric has even been used to treat lupus and kidney inflammation with remarkable success and again it was the whole spice turmeric that was used, not just the curcumin extract: “How to Treat Lupus with Turmeric“.

Caution! – Turmeric can act as a blood thinner (although it’s a very mild effect in quantities normally used in meals) so make sure you discuss its use with your physician if you are taking blood thinning medication such as warfarin or if you suffer from haemophilia or any other related illness.

Cruciferous vegetables form an important part of a whole food plant-based diet. They are highly nutrient dense, low-calorie, high in fibre, packed with health promoting micronutrients and disease preventing phytonutrients. Kale, broccoli, Brussels sprouts, cabbage and other vegetables in the family are incredibly beneficial for health in a nutritional sense, but broccoli and especially broccoli sprouts contain higher amounts of potential sulforaphane which is a powerful anti-inflammatory compound.

Sulforaphane has a direct effect on the regulation of TH17 related genes involved in the RA inflammatory process, here’s a quote from the following article: “Thus, SFN may offer novel clinical options for the treatment of TH17 related chronic inflammatory/autoimmune diseases such as rheumatoid arthritis.” Sulforaphane Inhibits Inflammatory Responses of Primary Human T-Cells Where SFN = sulforaphane.

Sulforaphane is produced by an enzyme (myrosinase) which is released when cruciferous vegetables are cut or chewed, so for maximum benefit broccoli for example, should be chopped into smaller pieces and left for 10 to 15 minutes to allow the enzyme to act and to produce the sulforaphane before any cooking takes place. Steaming is the best method of cooking and should be kept to a minimum, ideally just a few minutes. Raw is better in terms of sulforaphane production and absorption, and broccoli sprouts should always be eaten raw (after washing thoroughly).

It’s well known that apples offer a number of health benefits and that much of the nutritional value and most of the phytochemicals are contained within the peel. However, recently I was researching studies on fibre (pectin etc.) and accidentally discovered a study on the consumption of Apple Peel ‘powder’ and how it increases joint function and range of motion.

It’s a fascinating study and it motivated me to add apple peel on a daily basis to my whole food plant-based diet to help reverse my own rheumatoid arthritis. I’m currently using fresh apple peel but it’s difficult to obtain enough quantity so I’m locating a source of organic apple peel powder for future use. After some time, I’ll write a post on this subject alone to review its effectiveness in terms of improving joint function and range of motion. It’s early days yet :-)

The authors of the study explain that the dried apple peel powder has several direct effects on improving joint function and pain relief, but also produces a general increase in systemic antioxidant levels. It’s well worth reading the whole study but here is a short quote to give a flavour of the results: “The daily consumption of a DAPP in an older population with some joint mobility limitations resulted in rapid and sustained improvements in joint function. This improvement was not limited to each person’s identified problem areas; rather, a general improvement in the function of many joints was seen.”. Where ‘DAPP’ = dried apple peel powder.

Sesame seeds are another great source of nutrients and a useful addition to a whole food plant-based diet for general health reasons, but they also have a remarkable ability to protect against joint destruction in osteoarthritis (and long-standing rheumatoid arthritis). Quote: “The present study showed a positive effect of sesame in improving clinical signs and symptoms in patients with knee OA and indicated the fact that sesame might be a viable adjunctive therapy in treating OA.” From: Effects of sesame seed supplementation on clinical signs and symptoms in patients with knee osteoarthritis.

Sesame seeds contain specific anti-inflammatory compounds along with other health promoting micronutrients such as zinc, copper, selenium, calcium and fibre. Sesame seeds are delicious, versatile and easy to incorporate into a whole food plant-based diet on a daily basis.

Since sesame seeds reduce inflammation and protect against joint damage (especially knee joints) whilst at the same time providing additional health benefits with zero side effects, I’ve included them in my own whole food plant-based diet on a daily basis to help me fight and reverse my RA. To get the maximum benefit from sesame seeds, they should be ground into a powder (very) shortly before being added to meals.

In summary, the above top five anti-inflammatory foods for arthritis (including rheumatoid arthritis and OA) are whole plant foods, they’re nutrient dense, they provide additional health promoting benefits, they’re effective (science-based), and they have no side effects – except good ones! :-)