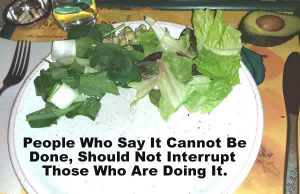 I’ve learned an important lesson recently that may be useful in motivating other rheumatoid arthritis sufferers to persevere in their efforts to reverse their disease and attain an effective remission/cure.

The lesson or conclusion came in two parts; one was an emotional milestone, and the other was the realisation that my existing approach was no longer producing consistent, continued improvement. I’d reached a plateau where I was much healthier but not cured. In my previous fight with RA (years ago) I had succeeded in achieving a full remission/cure, however this time around I am still struggling to reverse the damage caused by an antibiotic treatment for blood poisoning (and the blood poisoning itself of course) which I received a couple of years ago.

If you’ve been fighting rheumatoid arthritis for some time, trying various different treatments, diets, and lifestyle changes without success (or without complete success), then you may need to try a new approach (more about this below).

Alternatively, if you’ve had sustained success from time to time, using a particular approach but then regressed because you drifted away from that approach; it may be time to make a serious and extremely difficult emotional decision based on the question: “How much do I really want to be free from this disease?”.

The new approach (developed over the last several months) which I’ve recently put in place, is based on the idea of targetting all possible RA causes and aggravating factors at the same time in a combined treatment plan.

These are some of the current methods I am implementing simultaneously where possible. In doing so I have been able to better identify some of the issues which have been preventing my full recovery. Shortly I will be arranging a series of tests to further identify any hidden problems and to check the progress of my current diet in terms of vitamin D level and liver enzymes etc.

With rheumatoid arthritis, I don’t believe there is any supplement or single course of action that can create a remission or cure, despite many claims to that effect. If you are in the early stages of RA or if your RA is fairly mild, then a few small changes to your diet might be enough to make a big difference in reversing your illness. However, if your rheumatoid arthritis is more severe or long-term then you will probably have to try multiple approaches simultaneously in order to achieve results.

This is the key point; many people with RA will try MSM and expect to see improvement, or omega 3 rich fish oil, or vitamin D3 supplementation, but will then be disappointed with the lack of improvement. It’s not that these approaches are not helping, it’s just that by themselves they can’t hope to reverse years or decades of systemic damage caused by poor diet and other lifestyle factors, or by chronic infection.

Rheumatoid arthritis is brought about by a combination of causative and facilitative factors which accumulate over time. For example, an infection in an already weakened immune system or a chronic inflammatory response to long-term digestion of wheat and dairy products combined with a sudden decrease in beneficial intestinal flora caused by antibiotic use. There are factors which cause systemic inflammation and there are factors which allow it to manifest symptoms and illness. Another example; two people might acquire the same parasite infection in their gut; one will continue to lead a normal life unaware of the infection whilst the other will develop an autoimmune disease because their immune system was already weakened or compromised by another facilitative or contributive factor such as leaky gut.

Therefore, in order to combat more severe or long-term rheumatoid arthritis it is necessary to target all potential factors; kill or reduce infection, correct nutritional deficiencies, heal leaky gut, improve beneficial gut bacterial quantity and diversity, support the liver and so on.

How Much Do I Want to Be Free From Rheumatoid Arthritis?

This is the second part of my recent realisation/conclusion. So-called willpower (although this is actually a more complex subject than it seems) is perhaps the most important requirement in order to beat rheumatoid arthritis. We have to keep fighting, we can never give up no matter how disappointed we are – no matter how much pain we are in; we must stay positive and believe in our ability to become healthy again.

I’ve reached a point now where I will deny myself anything and everything in order to help achieve a full remission/cure. At the same time, I will take any measure, any step to bring me nearer to that goal no matter the cost; financially, socially or in terms of pain – both psychological and physical. I want to be well again and I will be well again. I visualise myself being more flexible and able to do more things; walk further, wash my hands with my palms together again, stand up and sit down with less delay – energy expenditure – and (broken glass type) pain, walk downstairs facing forwards instead of backwards as I have to do now, and so on.

I have decided I will once again cure my rheumatoid arthritis or die trying.

I reached the point where I looked at my joints, felt the restrictions in my life and understood the social consequences (loss of ‘friends’, financial loss, stress and anxiety caused to my wife etc.) and I realised that ‘I’ had to choose to be healthy again, more than this, I had to really ‘want’ to be healthy again. Only I could change my life, no one could do it for me. It was a ‘brick wall’ moment, especially difficult for me since this is the second time I’ve had to do this in close to forty years of dealing with RA.

I wrote this poem so that I wouldn’t forget that moment and I refer to it whenever I need to recharge my willpower:

Longing to fly, I stare at the sky,
That place I once was, it seems so high.
I reach up with heart and hand,
As the golden light turns to sand.

Return is a hope, like a silken thread,
If hope lies, then here I’ll die, on my eternal bed.
My back against the coldest floor,
A crushing weight upon my heart,
A weight exchanged for hope before.
If from me that silken thread, it does not part,
Then it may be I will return.. to hope once more.”

This is the reason why it’s so difficult to recover from rheumatoid arthritis and achieve a full remission/cure; it requires such a commitment, such a focus of the mind, and never ending willpower, quite apart from all the research, experimentation, cost and the constant belief that the next step will bring you nearer to health.