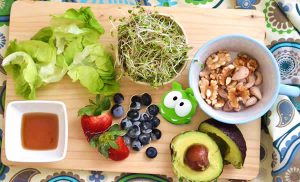 All cruciferous vegetables can produce sulforaphane but the highest concentration is found in 3 day old broccoli sprouts. The bitter taste and somewhat pungent aroma of raw cruciferous vegetables is an indication that they contain potential sulforaphane. I gave a brief summary of the benefits of sulforaphane and broccoli sprouts in a previous article: Top Five Anti-Inflammatory Foods For Arthritis – 2019 but in this post I’d like to go into a bit more detail.

Sulforaphane acts in a similar way to common non-steroidal anti-inflammatory drugs (aspirin, ibuprofen, naproxen, Celebrex etc.) by inhibiting the expression of the COX-2 enzyme and the production of inflammatory prostaglandin E2. However, sulforaphane acts without creating pathogenic and potentially deadly side-effects.

From this study: Sulforaphane inhibits IL-1β-induced proliferation of rheumatoid arthritis synovial fibroblasts and the production of MMPs, COX-2, and PGE2

Quote: “These results indicate that sulforaphane inhibits the proliferation of synovial fibroblasts, the expression of MMPs and COX-2, and the production of PGE2, which are involved in synovitis and destruction of RA, and suggest that sulforaphane might be a new therapeutic agent for RA.”

I eat cruciferous vegetables, especially broccoli sprouts, every day for the reasons I’ve mentioned above and they’re definitely helping me to reverse my rheumatoid arthritis. I’ve eaten broccoli, Brussels sprouts and kale for decades as part of my anti-RA diet, but I hadn’t realised that broccoli sprouts had such a high potential content of sulforaphane until relatively recently.

Sulforaphane production is still viable after steaming cruciferous vegetables for around 1 to 3 minutes, but raw is still at least ten times more productive and beneficial. An alternative is to chop the cruciferous vegetables into small pieces and leave them for at least fifteen minutes before cooking them, this allows a reasonable amount of time for sulforaphane to form before the myrosinase is destroyed by cooking. Another trick is to sprinkle some freshly ground mustard seeds onto the steamed vegetables before eating them; the mustard seeds provide the myrosinase enzyme which acts upon the glucoraphanin in the steamed cruciferous vegetables during chewing and swallowing, and the early part of digestion.

The cancer fighting ability of cruciferous vegetables especially broccoli and kale is well-known and not just because of their sulforaphane content although this compound has been particularly well studied in relation to cancer, especially breast cancer. Broccoli vs. Breast Cancer Stem Cells

There’s also some evidence that sulforaphane may be protective against skin cancer; topically it certainly offers a level of protection against sunburn. The studies covered in the following video by Dr Greger are very interesting: Broccoli Sprouts

Cancer cells can use our genes against us (epigenetics) in order to ‘blind’ certain parts of our immune defences to their existence. There are toxic chemotherapy drugs which can prevent cancer cells from hiding in this way however, broccoli sprouts can achieve the same thing (i.e. helping to reveal cancer cells to our immune system) to an equal or even greater extent, without the toxic side effects.

I also found some evidence that sulforaphane can exert an anti-cancer effect in leukaemia, prostate cancer, and breast cancer by reducing the survivability of malignant T cells. Please see the following article: SFN Is Not Toxic to Untransformed Human T-Cells but to Jurkat T-Leukemia Cells

I’ve also included the following document in this section regarding cancer because the opening paragraph provides an excellent summary of some of the other ways in which sulforaphane can fight cancer: SFN has received a great deal of attention because of its ability to simultaneously modulate multiple cellular targets involved in cancer development

Sulforaphane is protective against a number of brain diseases. I think this is in part because of its anti-inflammatory and antioxidant properties but sulforaphane also targets specific pathways in the brain which help to prevent damage to the central nervous system. The following article provides an overview of the CNS protective effects of sulforaphane: Sulforaphane Protects against Brain Diseases: Roles of Cytoprotective Enzymes

Evidence of a more specific neuroprotective effect of sulforaphane against Alzheimer’s (and possibly Huntington’s disease) can be seen in the following article: Beneficial Effects of Sulforaphane Treatment in Alzheimer’s Disease May Be Mediated through Reduced HDAC1/3 and Increased P75NTR Expression Quote: “SFN was observed to improve cognitive function and to protect against Aβ deposition in AD model mice. Up-regulation of p75NTR, mediated at least in part by reduction of HDAC1 and HDAC3 expression, was implicated as a potential anti-Aβ mechanism of SFN. SAHA has been documented to play a protective role in Huntington’s disease“. SFN = sulforaphane.

Identifying the causes of autism is a complex undertaking and is often frustrating and controversial. Personally, I’m sure that diet and lifestyle play the largest role in its development by either causing autism in the first place, or by making a person susceptible to other potential causative factors such as older type vaccines, heavy metals and other environmental pathogens. However, regardless of the cause(s) it’s nice to be able to discuss the more positive and productive aspect of ‘prevention’.

If you do a Google search you’ll find plenty of resources identifying the beneficial and preventative effects (in relation to autism) of a whole food plant-based diet and cruciferous vegetables in particular. However, once again there are studies pointing to the specific benefits of sulforaphane. In the following small but double-blind study, the beneficial effect of sulforaphane from broccoli sprouts is demonstrated in terms of reducing the negative behavioural symptoms of autism: Sulforaphane from Broccoli Reduces Symptoms of Autism: A Follow-up Case Series from a Randomized Double-blind Study

Sulforaphane (particularly from broccoli sprouts) can counteract many of the biochemical abnormalities associated with autism through at least six different pathways, not least because sulforaphane can cross the blood/brain barrier. In the following video Dr Greger explains these pathways and provides some evidence for sulforaphane’s effectiveness in treating Autism Spectrum Disorder: Best Foods for Autism

In summary, sulforaphane (particularly from broccoli sprouts) can be a very effective additional therapy in the fight against rheumatoid arthritis, cancer, Alzheimer’s, autism and many other chronic diseases with an inflammatory component or oxidative stress component (which is most of them). This in addition to the purely nutritional benefits (which are many) of broccoli sprouts and other cruciferous vegetables which form an important part of a whole food plant-based diet :-)